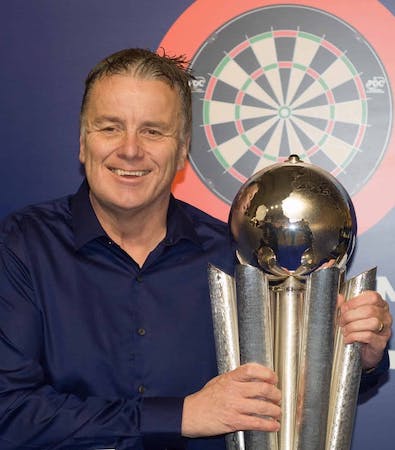 Championship player and darts speaker Keith Deller is best known as one of the founding members of the Professional Darts Corporation and former manager and coach of the two time PDC World Championship winner Adrian Lewis. Now working as a sports speaker for both live events and televised broadcasts Deller was a successful player during the 1980s and remains a popular showman.

Winner of the 1983 World Championship and runner up the following year Deller is known for playing with the once-banned 18-gram spring-loaded darts, during his career Keith Deller competed against and defeated a number of notable and notorious players including Eric Bristow, world number three John Lowe and defending champion Jocky Wilson. Deller remains the only player in history to defeat the world’s top three ranked players in the World Championship.

Breaking away from the World Darts Organization in 1992 Keith Deller became a member of the WDC, which soon became the PDC. As a sports speaker, Deller discusses the importance of the PDC and its role in professional darts regulation and management. His work as an after dinner speaker also covers his own professional career and his meteoric rise to sporting fame.

Keith Deller continued to participate in professional darts until the mid-2000’s, upon his retirement he began working as a coach and trainer for would-be and established darts professionals as well as maintaining a prominent career as a sports speaker.