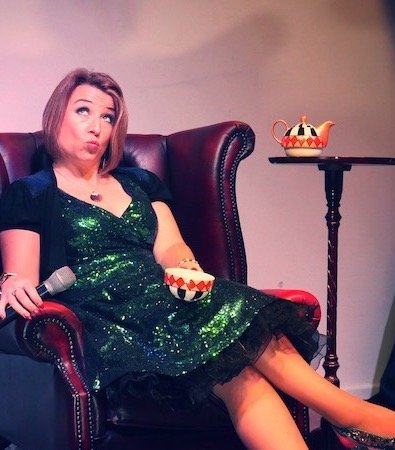 K-lo is one of the most versatile comedy vocal entertainers in the industry, covering all genres of music. Whether she is performing one of her many different tribute shows, or her flag ship show “Are you sitting comfortably?…let’s drink gin.” K-lo is guaranteed to find something for everyone!

K-lo’s trade mark “tongue in cheek” humour and comedic ability, makes her both endearing and likeable to audiences of all ages.

Having performed in many prestigious venues from London’s West end to New York, she brings her brand of warm, endearing humour and outstanding vocals to every performance.

K-lo undertook training in dance, acting and singing from a young age. She earned the nick name “Toppy” from her singing tutor, as she was the only one of his students who could hit a “Top E.

After many years of performing in various theatre productions, K-lo received the honour of singing for her majesty the Queen, and now proudly travels all over the world, performing on some of the world’s most prestigious stages.

Are You Sitting Comfortably…Let’s Drink Gin.
This show entails songs and stories from the life of a 30- something songstress. Based around Watch with Mother and the art of storytelling, this show combines hilarious stories with a fantastic choice of songs delivered with a tongue in cheek humour.

West End Woman to Broadway Babe
A fun-filled, sophisticated one woman tribute to the traditional musicals.

Hope And Glory
A nostalgic show taking you back celebrating those victory years.

Rewind
A fun-filled tribute to the 80’s and 90’s reinventing the classics.