Introduction
The most successful all time goalkeeper of the Liverpool side of the 1980’s and early 90’s, Bruce is undoubtedly one of the most outstanding keepers in the world game. He is renowned not only for his extrovert personality but also for his unorthodox and frequently spectacular style of play.
Performances
1 x 45 minute lecture
1 x 45 minute Q&A / Interview
Audience
UK
Location
United Kingdom
Home Airport
TBC, UK 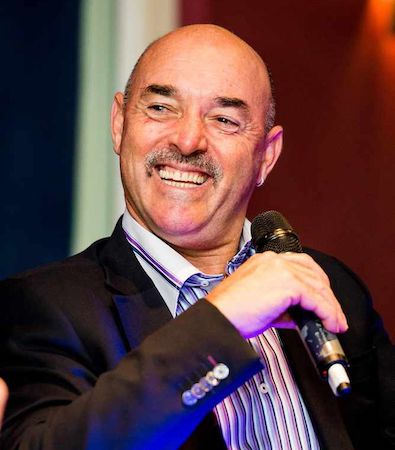 Bruce has a particularly interesting background for he was born in South Africa and brought up in Zimbabwe thereafter leaving to play first in Africa and then in the North American Soccer League for Vancouver Whitecaps. They lent him to play for Crewe Alexandra in 1980 where he quickly came to the notice of Liverpool who followed him back to Canada and signed him as cover for Ray Clemence. However, after Bruce had played just three reserve games for Liverpool, Clemence was transferred to Spurs and he took over, becoming a colourful and invaluable member of the team.

Having signed for Liverpool in March 1981, and having played for Liverpool for many seasons, he has been privileged to be part of the make-up of one of the World’s greatest clubs.

Increasing violence on the terraces and especially the events of Brussels in 1985, very nearly led him to give up playing until he realised it would be simply surrendering to the mindless violence of hooligans.

Hillsborough followed in 1989 and Bruce was the first player to be aware of the Leppings Lane end troubles and was first to offer and call for assistance.

Bruce eventually moved to Southampton in 1994 and stayed until 1996.

After leaving Southampton, Bruce attended two FIFA Coca Cola Fertura One and Two in 1996 and 1998 respectively along with gaining invaluable coaching experience with the Zimbabwe national side.

His coaching positions carried on in South Africa. Firstly, he came to the rescue of Seven Stars in 1999, being appointed to the side to try and get them out of a relegation position. This he did. He found a position with Supersport United, but again half way through the season they were looking at relegation but he steered them to a mid table position, then went on to manage Hellenic City in Capetown.

Everything about Bruce is out of ordinary and he is one of the most flamboyant and likeable figures in football today. Has had his moments, the trials and tribulations of a long drawn out Court case, where he was found not guilty and where many of his friends in football stuck by this remarkable character. The attacks on his family, his credibility and his devotion to the game he loves have made him a stronger man and an asset.

In 2019 Bruce published an autobiography “Life in the Jungle” well received all over the UK and Europe.