Introduction
Rustie is known for her delicious recipes as well as for her vibrant personality and infectious laugh. Her programmes are associated with fun and having a good time whilst learning something new. Rustie’s appeal is multi-cultural and across all age groups and genders.
Performances
1 x 45 minute lecture
1 x 45 minute Q&A / Interview
Audience
UK
Location
United Kingdom
Home Airport
TBC, UK 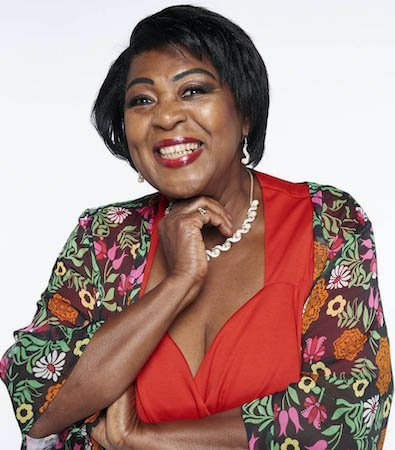 Rustie Lee has led quite a varied career, ranging from being a television personality to a politician to a singer and an actress. Best known for being a TV personality, she is no stranger to the public spotlight. Rustie first came to the attention of the general public when she appeared as a chef on TV-am in the 1980’s. Since then she has gone on to feature in a number of other TV shows such as This Morning, The Alan Titchmarsh Show and The Wright Stuff. After her successful stint on TV-am, Rustie took over from Sarah Kennedy as the host of the ITV show Game For a Laugh.

In 2004 she appeared in a show called I’m Famous and Frightened!, which saw her stay in a castle for the weekend seeking paranormal activity with the help of a medium. In 2017 Rustie featured on The Real Marigold Hotel, where herself and a group of celebrities travelled around the major port city Kochi in India to experience the culture.  It was also in 2004 when Rustie decided to dive into the world of politics. She began her journey into politics by joining the United Kingdom Independence Party, better known as UKIP. In 2005, she was chosen as the UKIP candidate for the Wyre Forest constituency. Rustie also stood for UKIP in 2009’s European Elections for the West Midlands constituency, however, she was not elected.

Alongside her history of television and politics, Rustie has also turned her hand to writing. Rustie has written a number of cookery books, Rustie Lee’s Caribbean Cookbook in 1985 and A Taste Of The Caribbean in 2007. Rustie has also featured in a number of pantomime productions, such as Aladdin, Jack and the Beanstalk, Peter Pan and Snow White and The Seven Dwarfs. Additionally, she also briefly joined the cast of EastEnders to play Opal Smith, the aunt of Gus Smith. Rustie is clearly confident with speaking to the general public, giving her the perfect qualities for a keynote speaker. She is also no stranger to talk shows, having a regular feature on Big Brother’s Bit On The Side.