Introduction
Mike has his own twist covering music from all genres. A multi-instrumental pioneer in the world of one artist playing a multitude of instruments.
Performances
2 x 45 minute Shows
Audience
UK and International (English speaking)
Location
United Kingdom
Home Airport
Birmingham, UK 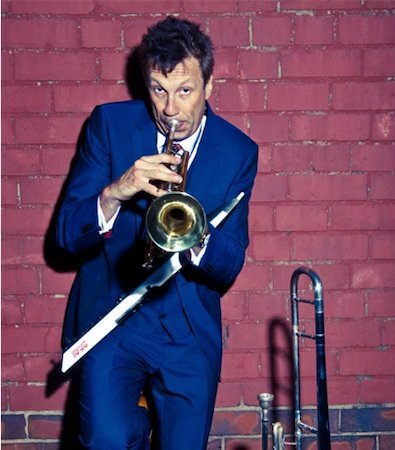 Trumpet, trombone, Ewie wind synthesiser, harmonica, timbales, saucepans, dustbin, hosepipe…. Mike plays all that and more (he will play the kitchen sink if you will let him!).

As founder and frontman of the popular party band Rang-a-Tang, Mike has put all the energy, excitement and pzazz of his zany alter ego band persona into this one man extravaganza.

Covering everything from ‘Wonderful World’ through to ‘Human’, Mike will take you on a musical journey like no other, with a few laughs along the way.

Mike’s musical life started in Bideford Town Brass Band at the age of 7. He went on to work as a professional trumpet player performing with the likes of Supercharge, Ruby Turner, Climax Blues Band. He has performed for over 25 years with his own band Rang-a-Tang playing at venues including Earl’s court, Dominion Theatre, the London Palladium and most major theatres in the UK. The larger-than-life frontman of the band, Mike plays all the following instruments during their highly energetic sets – trumpet, flugel horn, valve trombone, EWI wind synthesiser, drums, percussion, harmonica, guitar and keyboards. His self-penned song ‘Very Terry Wogan’ was the Radio 2 record of the week receiving rave reviews and a cult following plus appearances at prestigious Terry Wogan charity events.

When he is not performing live shows, Mike enjoys working as a session musician, composing and playing parts for all genres of music to a huge range of clients from across the globe.