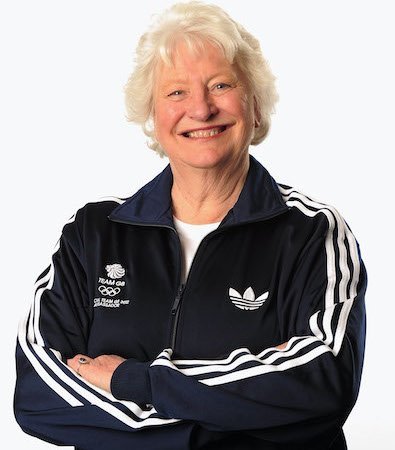 Mary moved to Northern Ireland with her family when she was 11 years old. Northern Ireland has been home to Mary Peters since then. Even today, Mary still lives in Belfast although most of her life she has spent travelling the world, competing and working.

Mary has been an inspiration to people throughout Northern Ireland, bringing people together in times of trouble, through her sporting triumphs. Mary Peters is a true ambassador for Sport, reaching the pinnacle of sporting effort and achieving the ultimate: an Olympic Gold Medal.

In the 1972 Summer Olympics Mary won the gold medal in the women’s pentathlon. She has represented Northern Ireland at every Commonwealth Games between 1958 and 1974. In these games she won 2 gold medals for the pentathlon, plus a gold and silver medal for the shot put.

Mary was humbled to be awarded in 2019 the Honour Lady Companion of Honour of the Most Noble order of the Garter. The investiture ceremony presided over by the Queen took place at Windsor Castle in June 2019. Mary is currently one of 24 who are given this exclusive title.

In 2017 Mary was awarded the Dame Commander of the Order of St John.

In the 2015 New Year Honours list she became Member of the Order of the Companions of Honour (CH).

In 2000 she was appointed Dame Commander of the British Empire (DBE).

She served as Lord-Lieutenant for The County Borough of Belfast until her 75th birthday when all LL’s are given mandatory retirement.  She received the Freedom of both the City of Belfast and the City of Lisburn.

Northern Ireland’s premier athletics track, on the outskirts of Belfast, is called the Mary Peters Track in her honour where a three quarter sized statue watches the next generation train and compete. Lady Mary now spends most of her time helping young sports men and women to achieve their dreams by supporting them through her charity, The Mary Peters Trust.

Mary was selected as one of 27 Olympic athletes chosen by the BOA to be Ambassadors for Team GB 2012. As an official London 2012 Ambassador, Mary was an integral part of Team GB prior to and during the Olympic Games. She helped British athletes and the wider Team GB to achieve Olympic success, and in doing so, serves as a source of inspiration and motivation for the 60 million Team GB fans across the UK.

Mary was also selected by Games Sponsor SSE as an Ambassador for the Glasgow 2014 Commonwealth Games and travelled to the Gold Coast, Australia as the Patron in 2018.

(including Moscow and LA Olympic Teams)

Freedom of the City of Belfast 2013