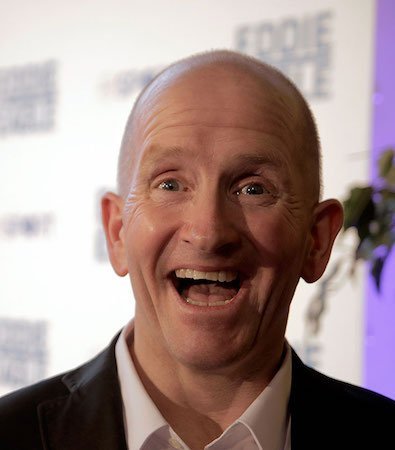 Eddie Edwards, also known as Eddie ‘the Eagle’, is a British skier and Olympic speaker who was the first Briton to compete in the Olympic ski jumping challenge at the 1988 Olympic Games in Calgary. Born in Gloucestershire, Edwards made his first attempt to join the British Olympic’ team in 1984, narrowly missing out on a place in the downhill skiing team. Refusing to be put off by this first failure Eddie Edwards moved to the US and continued training as a downhill skier, however a lack of funding quickly put an end to Eddie’s training and, realising that there were no other British contestants for Olympic ski jumping, Edwards turned his training to jumping making him the only possible GB candidate for the ’88 Games.

Edwards first represented Great Britain the 1987 World Championships and ranked 55th in the world, as an Olympic speaker he has notoriously shared the story of where he was when he learnt he has qualified for the next Olympic Games: working as a plasterer and living in a Finnish mental institute because it was cheaper than finding alternative accommodation! Eddie Edwards quickly caught the attention of the British public, by the end of the Olympic Games in 1988 he was the best ski jumper in the UK, holding the record at 73.5 metres. However, this was the highlight of Edwards’s appearance at Calgary as he was otherwise largely unsuccessful, finishing last in both the 70m and 90m contests.

It was Edwards’ determination and arguably his lack of success that made him so popular amongst audiences however and Edwards has continued to feed off of this success in his work as a sports speaker in the years’ that followed. Edwards’ lack of success at Calgary inspired the instigation of the Eagle Rule at Olympic qualifications, which states that competitors must achieve a certain level of success in international tournaments before they can qualify to represent their country. Edwards did not qualify for the 1992 Games. Eddie Edwards continued to ride the waves of his public popularity for several years, appearing as an Olympic speaker and media personality at a variety of televised events and also appearing in a number of nationwide advertising campaigns. Remembered as the underdog, Eddie Edwards has toured the globe as a sports speaker sharing the story of his determination and failure, both a brilliantly comedic and inspirational Olympic speaker there really is no one else like Eddie the Eagle!

In 2016, the film “Eddie the Eagle” was released, based on Eddie Edwards’ historic career as the first competitor to represent Great Britain in the Olympic ski jumping. Played by leading actor Taron Egerton, “Eddie the Eagle” was nominated for numerous awards including the Empire Award for Best British Film. Most recently, Edwards has made various media appearances on shows including on The Jump, Splash! and Let’s Dance for Sport Relief. In 2017, Eddie made a grand return to the slopes at the Canada Olympic Park. He revisited memories from the 1988 Games by making his first jumps in over 15 years.