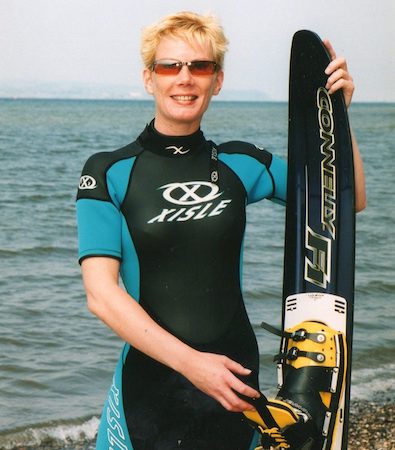 The Janet Gray story is unique.  It is awe inspiring, truly motivational and inspirational, yet, from her world of darkness, Janet shines the light of positivity on everyone she meets.

Janet, as a young girl and teenager, was a very happy, sporty, outgoing, confident and independent person. Her life was that of a normal and contented young girl.

Then suddenly, at the age of 21, Janet suffered a horrific and traumatic life changing experience, when she lost her sight totally and quite suddenly, due to a very rare eye disease. Being plunged into a world of darkness, Janet had to adjust to this new and terrifying existence and for a long time, it was a battle of sheer will and determination, until she discovered the sport of water skiing and life was dramatically transformed.

Through hard work and dedication, Janet reached the pinnacle of her sport to become World Disabled Water Ski Champion on four occasions and is World Record holder in all three disciplines of slalom, trick and jump. She was World Champion in 1999, 2001 and 2003.

Life was good, but Fate hadn’t finished with Janet and in 2004, whilst winter training in Tampa, Florida, Janet hit the large metal ramp in the lake at 60mph. Such was the force of the impact, that her survival was considered impossible.

Once again, Janet had to draw on her inner strength and determination, clinging tentatively to life and despite sustaining multiple serious injuries, she survived. She then stunned the medical profession and sporting world when she not only got back on her feet, but got back on her skis and went on to regain all her titles at the 2007 World Disabled Water Ski Championships in Australia.

Although back into full-time training, the ongoing injuries and constant rounds of surgery from the accident were taking their toll on the body and so in 2012, Janet retired out of International sport.

In 2013 a new challenge came Janet’s way, when she was asked to run in the local government Elections and in May 2014, Janet was duly elected to the new Super Council of Lisburn & Castlereagh City Council.

The Janet Gray story is unique. It is awe inspiring, truly motivational and inspirational, yet, from her world of darkness, Janet shines the light of positivity on everyone she meets.